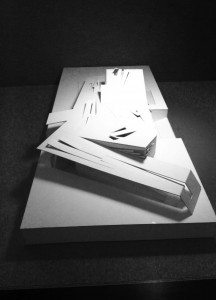 The lives of Japanese-Americans were disrupted and disturbed when they were forced to relocate to internment camps after Executive Order 9066 was signed. Museum #9066 is an abstract representation of the original barrack that rested on the site and the internees resided in. 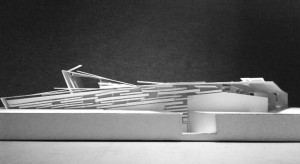 The rectilinear form was disfigured using expansion and compression to convey the emotions during the process of relocation and signify the relationship between spaces.

The circulation progresses through the different stages of camp life and Japanese-American history while using natural lighting to create a visual emotional relationship. A series of ramps form a connection between spaces while conveying the feeling of abandonment and anticipation.

The entire structure possess a linear form that responds to the site and is oriented toward important views and landmarks.