In fall 2013, students from Drury University were asked to design a museum remembering the World War II Japanese-American internment camp located in Rowher, Arkansas. Situated at the site of the original camp, this museum design should speak to the natural setting as much as the collection itself. Students were provided with a time- line explaining the history of the camps, artifacts from the camps, and artwork created during internment. They were told that temporary exhibition space would be needed to house work by artists that focus on the camps. An exterior space would also need to be created for reflection. The original project scope can be downloaded Museum 9066 Assignment. 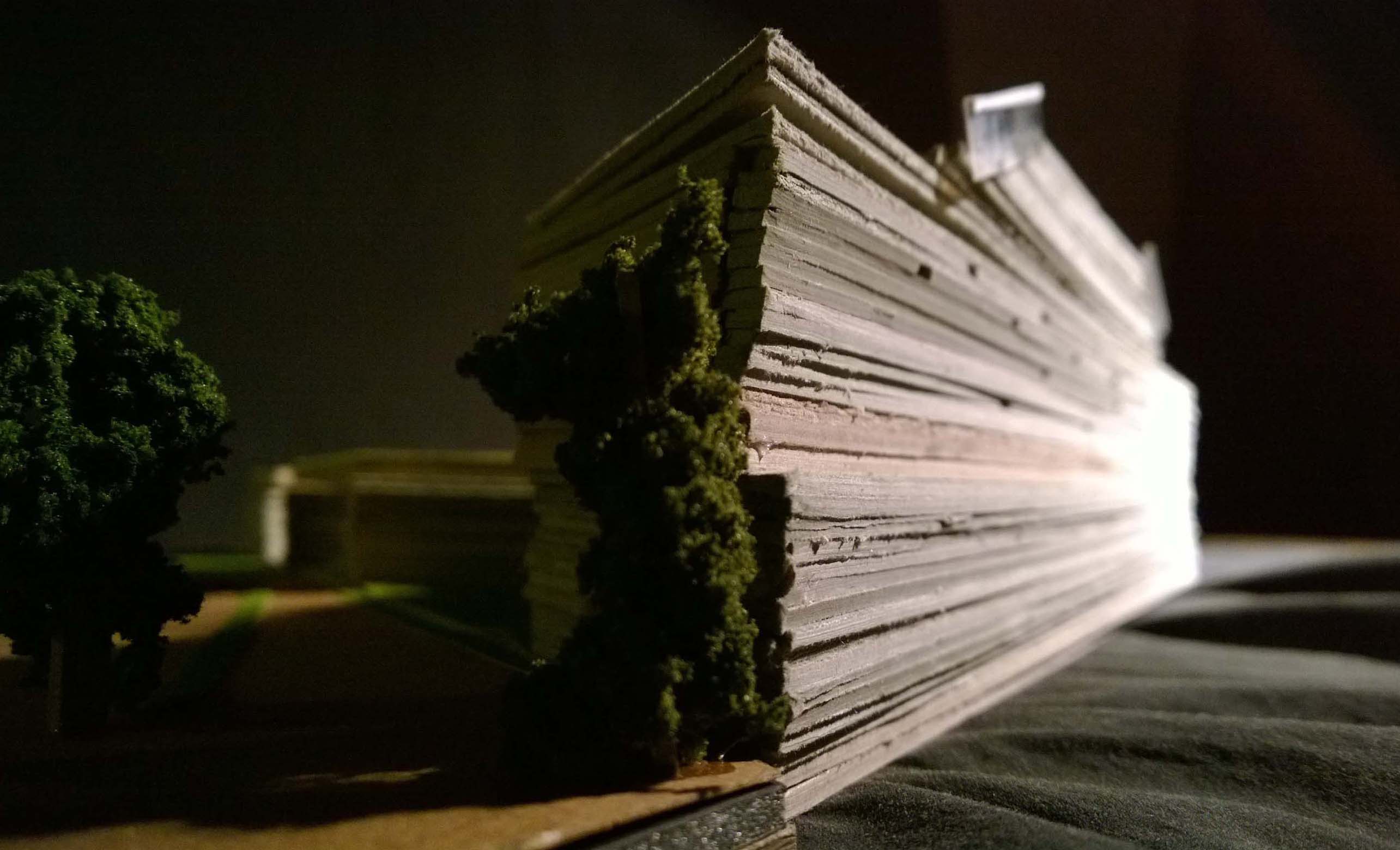 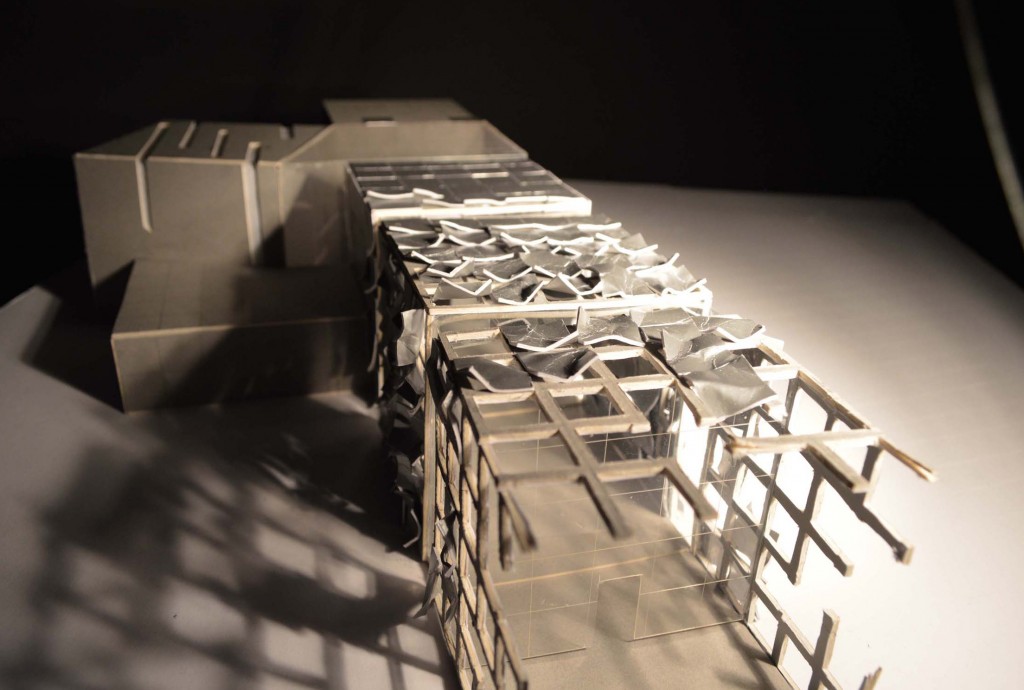 IN FALL 2013, DRURY UNIVERSITY STUDENTS IN ARCHITECTURE 213 WERE ASKED TO DESIGN A MUSEUM AS A CLASS EXERCISE FOR THE ROHWER JAPANESE AMERICAN INTERNMENT CENTER. THE PROJECT WAS CALLED "MUSEUM 9066." WHAT THEY CAME UP WITH WAS AMAZING. 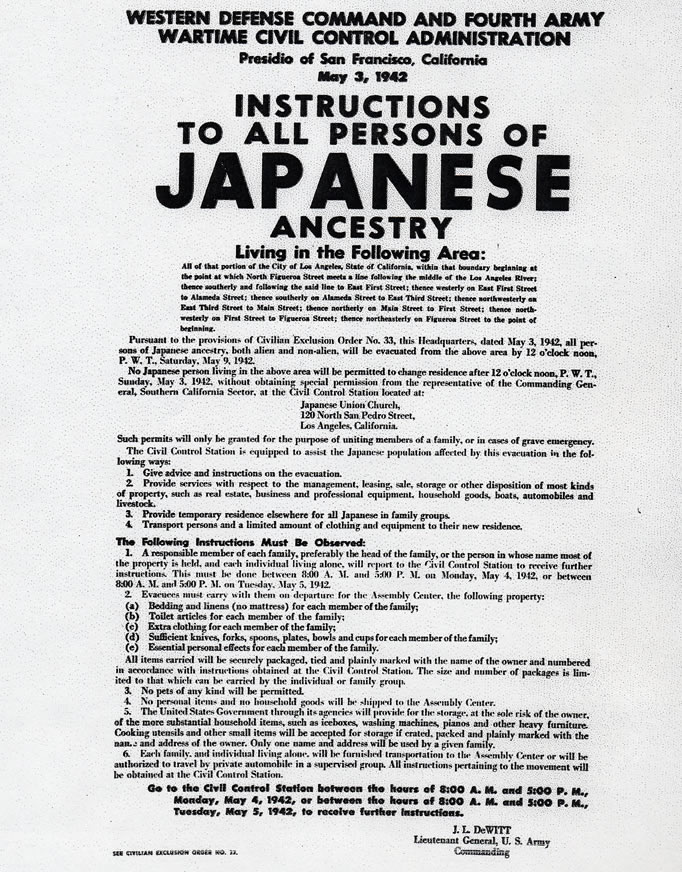 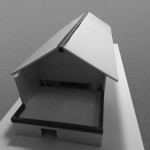 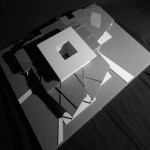 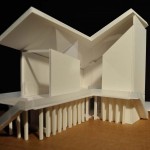 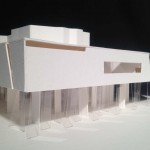 "When learning about this time in history, I found the emotions from the people became the most important aspect in the concept of my design. My design for the museum strives to educate and link current visitors with those interned long ago."

"I express this presence of both order and disorder..by having..angled walls clash with the strict structural grid of columns, as well as the ordered central space and garden."

"My building is a movie-like one. As I had the journey to the site, people will have a journey exploring the building, and will communicate with the site and historical facts more closely."

"My design idea is based on the words, such as isolated and drama to express the people’s life in the camp by architecture language." 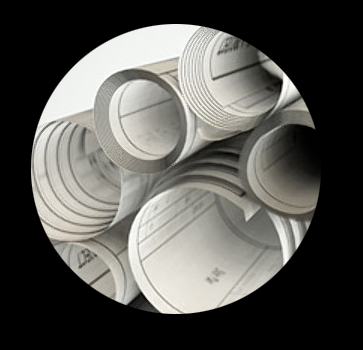 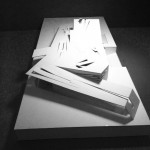 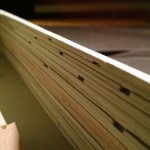 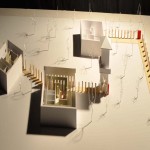 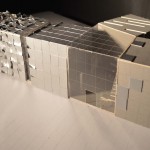 "The circulation progresses through the different stages of camp life and Japanese-American history while using natural lighting to create a visual emotional relationship. A series of ramps form a connection between spaces while conveying the feeling of abandonment and anticipation."

"The expression of the hardship became the stairs that one will find over and inside the museum. From the bird view, the stairs stands out and the rest of the building will blend in with the site where they grow soya beans. The stairs are also one of the main sources of light inside the building."

"I designed my building with the intent that once you drive onto the camp you’re in the camp, you become an internee or a “post”. And once you step on the sidewalk “on the other side of the posts” you're in the camp and now on the long journey of a different life."

"This...Museum conveyed the dehumanization of the Japanese people during WWII. They were stripped from their established families, communities, careers, and identity as an individual; I wanted my design to incorporate this dehumanization with the use of form and light." 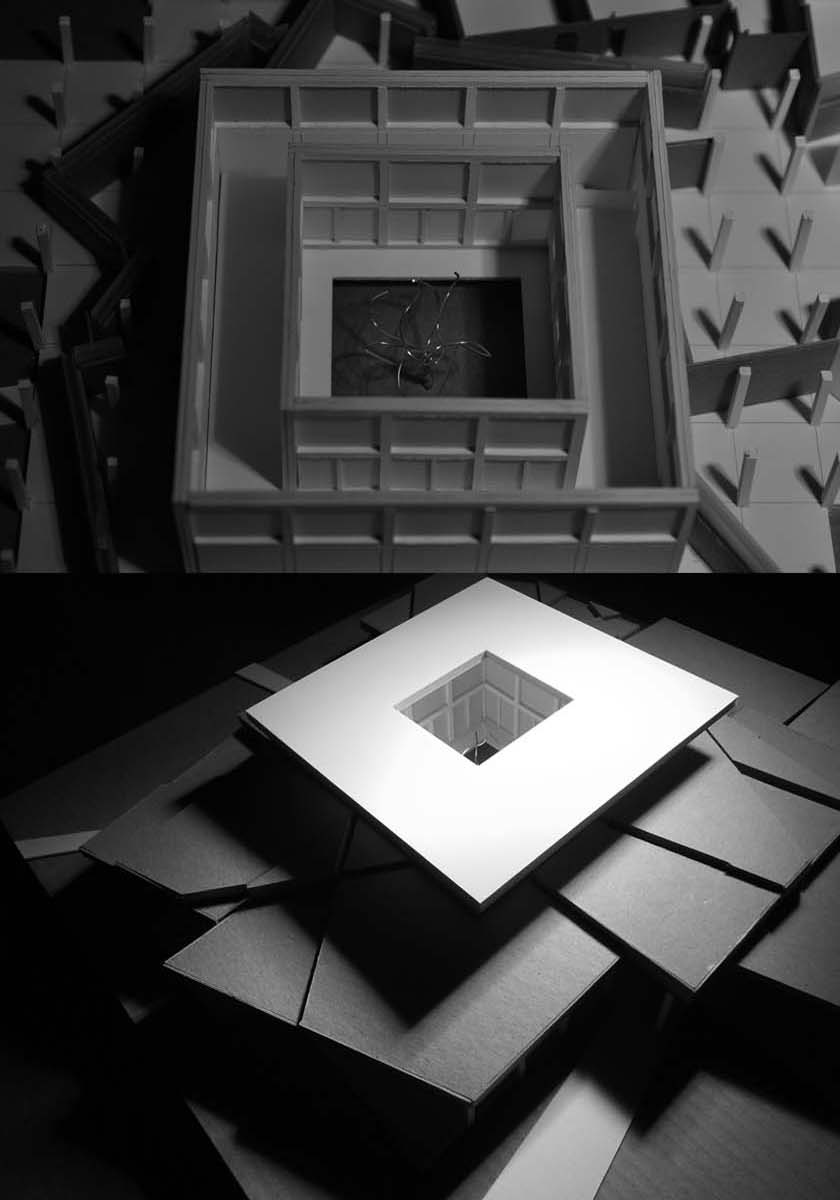 Enjoyed this post? Consider sharing it.

In February of 1942, two months after Japanese forces attacked the United States at Pearl Harbor, Hawaii, Executive Order #9066 was signed by president Franklin D. Roosevelt. This resulted, among other things, with the relocation of tens of thousands of Americans of Japanese ancestry from their homes in the western US to inland camps. While the order applied also to resident aliens of Italian and German descent, only US citizens of Japanese heritage were affected. You can read Executive Order #9066 by clicking on the icon at the bottom of the page. 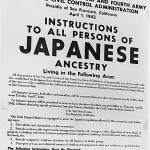 Design a museum remembering the World War II Japanese-American internment camp located in Rowher, Arkansas. Situated at the site of the original camp, this museum design should speak to the natural setting as much as the collection itself. Included in the permanent collection is a time- line explaining the history of the camps, artifacts from the camps, and artwork created during internment. Temporary exhibition space will house work by artists that focus on the camps. An exterior space is to be created for reflection.

The site is located along the road leading from the highway to the cemetery. Students will choose the exact location as part of their design solution.

Several challenges await the designer. First of all, this is a museum and one needs to consider how people move through and view collections. Designers must think about how natural light, ventilation, temperature etc. affect both the collections themselves as well as the how one views the work. Use of sunlight, for example, will be very important in this project. Along side environmental and organizational concerns, there is the human aspect of internment. A successful design will address how these people must have felt having their lives put on hold, uprooted and transported across the country. How did prejudice and ignorance play a role? Many of the internees had brothers and sons fighting in the armed services while they were denied basic constitutional rights. Finally, designers must take into account the influence weather and landscape of rural Arkansas can and should have on the project. 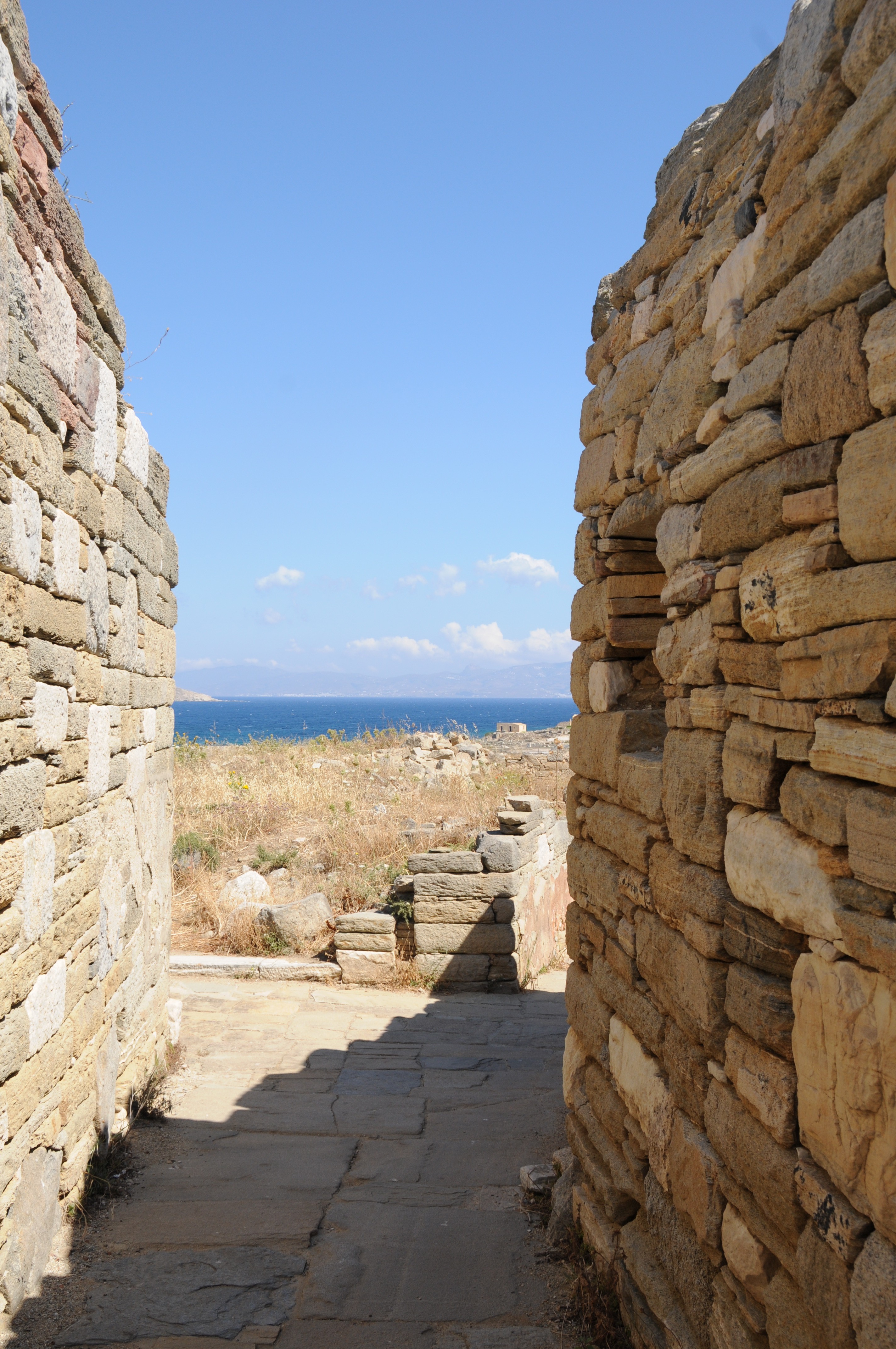 Professor Marshall Arne joined the faculty at the Hammons School of Architecture full time in 2001. Prior to this, for 18 years in practice, he held design leadership roles with architectural firms in the San Francisco bay area, Milwaukee, Wisconsin and Kansas City, Missouri. He continues to practice as principal of Art & Architecture LLC as well as participating in national and international architectural design competitions. In 1993, Professor Arne was awarded the prestigious Plym Traveling Fellowship from the University of Illinois resulting in extended residence in Paris, France studying the dynamic of contemporary modern architecture in the historic urban fabric of this great city. In his tenure at Drury, Marshall has concentrated on courses in digital design media, traditional presentation techniques, architectural practice, professional communication and architectural study abroad programs, leading trips to Paris and southern France, Berlin, Barcelona and northern Spain, Florence and Tuscany, Venice, Athens and the Peloponnese. These study abroad experiences, led on behalf of Drury as well as the University of Illinois, Versailles program, have helped him refine skills in architectural sketching and develop a keen understanding of the European architectural landscape.

Museum 9066
The Assignment
Professor Marshall Arne
This material is based upon work assisted by a grant from the Department of the Interior, National Park Service. Any opinions, findings, and conclusions or recommendations expressed in this material are those of the author(s) and do not necessarily reflect the views of the Department of the Interior.